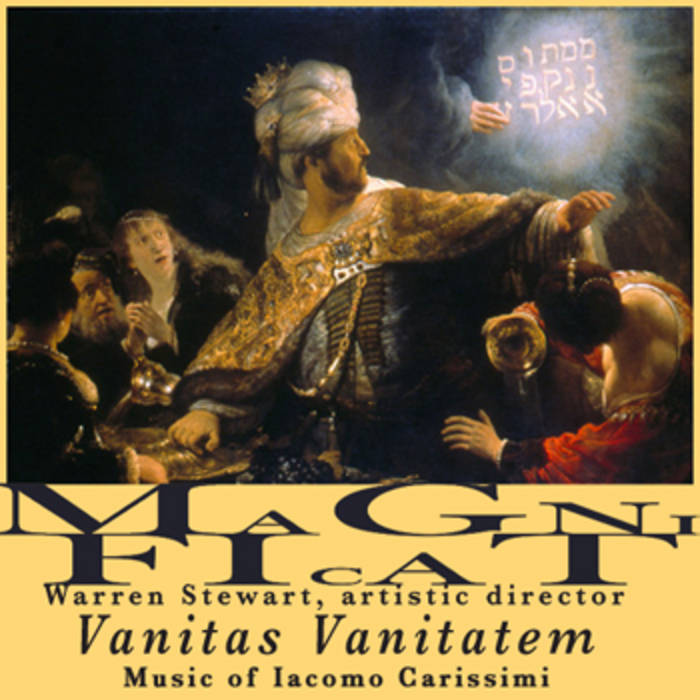 "The most excellent Iacomo Carissimi, a composer of great fame, most worthy maestro di cappella of the Church of S Apollinare of the German College for a period of many years, outshines others in originality and in case of compositional style, moving the spirits of the listeners into many moods; for his compositions are full of life and vivacity of spirit."

Writing in 1650 in his widely circulated tome Musurgia Universalis, Athanasius Kircher was unreserved in his praise for his fellow Jesuit Iacomo Carissimi and drew on many of the master's works to exemplify the use of music to express emotion and touch the affections of an audience. His reputation as a composer and teacher was promoted by the singers he worked with and his many students, most notably Marc-Antoine Charpentier. Händel famously plagiarized some of Carissimi's works and Charles Burney, writing over a century after the composer's death, devoted more space to Carissimi in his General History of Music than to any other composer of the 17th century. Please visit magnificatbaroque.com?id=139 for more information about Carissimi.

This EP presents live recordings of three works by Carissimi - his setting of the dialogue "Alma, che fai, che pensi?", the madrigal "Fuggi, fuggi" and the oratorio "Vanitas Vanitatum" - along with two instrumental works by other musicians working in Rome during the 17th Century, a canzona for violins by Girolamo Frescobaldi and an organ toccata by Michelangelo Rossi. The performance took place at St. Gregory Nyssen Episcopal Church, San Francisco on September 24, 2004.

(English Translation)
Body
Soul, What are you doing, what are you thinking?
Why do you weep and sigh,
why do you take offense at me
and scorn my faithful senses
which have been used to serve you,
offered a thousand times to please you, foolish one?

Tell me, tell me, o gracious Soul,
why you shun and flee me,
why you are consumed with sorrow
and why do you wish to let this body
(which lives solely because of you)
be deprived of life now, as well as of joy?

Soul
O my fleshly dwelling place,
for you do I weep and sigh,
and I take offense at you again
because you turn your back on Heaven.
do you not think to hold the gates
of the senses open to the nearness of death?

And while you ask me
why I shun and flee you,
why I am consumed with sorrow,
I see that you do not believe that you are—
even before you reach your end—
a corpse that breathes, a shadow that lives.

And I see nearly extinguished
in your eyes, o blind one,
the light that I bring you.
therefore remember this
one thing, which I earnestly desire to say to you:
man is a dream of a shadow, a shadow of a dream.

Body
But if you say I am this sort of creature
even now when you give me life, when
cruel death sends you away
from me into exile, what
will be the prospect for this burdensome flesh,
that because of you is like an innocent child?

Soul
What would remain for you then,
deprived of your senses and without
my lifegiving presence,
I wouldn’t know how to explain to you,
o frail Body, because of the
shivering horror and shock in thinking about it.

I will only tell you that our
very short life goes through
its days as soon
as it shows itself to the heavens,
in case in the meantime you wish through me
to bring light to your eyes and your voice to song.

Body
Yes, I do, and I leave while
our song remains:
I will go down low to earth,
since I am made of earth,
but, since you are a spirit come down
from heaven, you must rise up into heaven.

Soul and Body
Our life is dust,
that, raised up
in a moment by a swift wind,
spins around up in the air;
but as soon as it is in a dry cloud,
it easily returns to the bosom of Mother Earth.

Soul
And then consider smoke,
that with a thick veil
tries to obscure
the clear face of heaven, but it no sooner
goes in blind fury
against the serene heavens than it dies in the air.

Body
The sea is like this, in that, armed
with whirlwinds and storms,
it dares to spin up
to the stars with a furious face,
but suddenly this wave
that once was threatening heaven now floods hell.

Soul
It is like the spume
of the sea that, as the sea breaks up,
in a way weeps as it grows,
and in its weeping it consumes itself.
thus it is, to put it nicely,
that life is a brief weeping of death.

Body
Likewise is the voice, which, in going
outside the chest that produces it,
comes to be, in a way, except
that it dies as it is born:
on the lips it has its cradle and in the ears its grave.

Soul and Body
Consider the flower of the field
that I see at its freshest bloom:
you could say it’s a like lightening flash
that appears amidst the clouds,
such that as it appears, it disappears.
Track Name: Carissimi - Fuggi, Fuggi
Text & Translation

Flee, flee that love that so entices
the incautious hearts of wretched mortals!

Sweetness is not
constant between us,
and changeable
devotion does not last.

It is a flower but poisonous,
it is a poison but pretty;
the more it deceives more, the more it smiles.
when it charms the eyes, it slays the heart.

Run, run to that love that alone enflames
the pure hearts of the happiest lovers!

Joy more noble
the heavens don’t have,
that constant and unmoving
will always be there.

Passion is not painful;
it burns, true, but compassionately,
and the more it enflames, the more it is pleasing:
it makes the eyes weepy and the heart happy.
Track Name: Carissimi - Suonera l'ultima tromba
Text & Translation

Speak, speak
you buried corpses,
and turned towards us,
you spectacles of horror, show your bones.
Speak, speak
and tell how many lie here
who spent among pleasures a life
of thriving youth
hoping to last whole centuries.
Death at last folds them in these shadows,
and nothing remains of them but dust.

Those who trust
in youthful age,
trust ill,
they think to rejoice,
but then find
that it is vanity.
Those who repent
of one day only
are not exempt.
The hours that strike
ever warn us
to live thus.
Yesterday is gone.
how they leave you,
the years that pass.
The tombs teach that souls
do wrong to engage
themselves down here.

I, from bones buried and reduced to ashes,
seek to win counsel for unrepentant souls.
And yet I ask in vain
for distant help,
if down here the dangers are many.
Friend, on whose cheeks
lilacs and roses bloomed a little before,
go forth among the unfortunate ones,
your limbs hidden by a cruel death.
Ah, but the example seen
does not avail to move the impious one,
who may sin, buried many ways.
Though Heaven alerts him with grievous warnings,
He, oppressed with the torpor of vices, sleeps on.
Track Name: Carissimi - Vanitas Vanitatem Part 1: Proposui in mente mea
Text & English Translation

Tenor
I decided in my mind to ask and survey the wise about all the things that there are in the world. I saw all that happened under the sun, and I contemplated all those things most desired by the sons of men, and so all is vanity and affliction to the soul.
Vanity of vanities, all is vanity.

First Soprano
I meditated on dedicating my spirit to wisdom; I gave my heart to know prudence and the Doctrine so to avoid foolishness and sought what is useful to the sons of men to help them proceed with the days of their lives and I realized that even in this there is anxiety and affliction of the soul.

Vanity of vanities , all is vanity.

Alto
I said to my heart: I should go and enjoy all delights, and use good things. I exalted my works, built palaces, planted vineyards, orchards and gardens, and built reservoirs of water to irrigate the forests of budding plants. And I found true that all these were vanities and affliction of the spirit.

Bass
I collected silver and gold, and the goods of kingdoms and countrymen. I also owned slaves and had many servants, armor too and I bought large flocks of sheep and I surpassed the riches of those before me. And I found true that even this is vanity and affliction of the spirit.

Second Soprano
I hired men and women singers and the delights of the sons and men and I did not deny myself enjoyment from my heart, or to lavish in all things I prepared. But looking on to all the things I had done, in all I saw vanity and affliction of the spirit, and that nothing lasts under the sun.

First and Second Soprano
From here, oh mortals learn
that the joys of the world are vain,
struggles are vain,
honour is frivolous,
favors are false:
all things are vanities and darkness.

Chorus
All are vanities and darkness.

Where are the famous leaders
who created laws for the world,
where are the guides of the people,
the founders of the cities?

Where is the famous descent of the heroes,
where are the vast piers of the cities,
where is Athens, where is Carthage,
and the ancient face of Thebes?

Only the name remains.

Only the name remains.

Oh, we the miserable.
We disperse like water
and like a leaf
that is taken by the wind,
we fall, we are dragged away.

We are deceived by our dreams,
fooled by time,
deluded by death;
the things we anxiously sought,
that we urgently asked for,
all these are vanity and darkness.