Vivaldi Magnificat from the 2010 Berkeley Festival 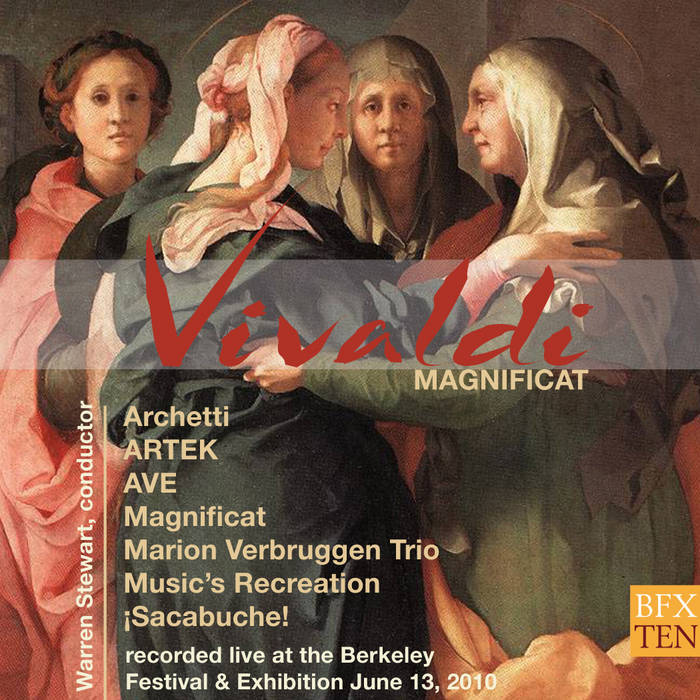 The 2010 Berkeley Festival & Exhibition concluded with a celebration of the extraordinary repertoire of music composed by Venetian composers for the elaboration of the office of Vespers during the century following Monteverdi’s monumental Vespro della Beata Vergine in 1610. Each of the ensembles that had been featured in main stage events at the Festival contributed to the final concert with all joining forces for the performance of Vivaldi's Magnificat captured on this recording.

The towering figure of the Italian High Baroque, Antonio Vivaldi was born in Venice in 1678. He studied violin with his father and may have had his first composition lessons with Legrenzi, whose style is reflected in his early vocal works. He would become the most famous and imitated Italian musician of the 18th Century and remains one of the most beloved and often-performed composers of the Baroque Era. Astonishingly prolific, Vivaldi composed in every genre current in the first half of the new century and, while his hundreds sonatas and concerti were the influential on the development of the compositional style of the high Baroque and contributed most heavily to his enduring reputation, he also wrote over 50 operas and a significant body of sacred works.

Vivaldi traveled widely and held a variety of positions in courts, churches and other establishments, notably the Ospedale della Pietà, one of four Venetian institutions devoted to the care of orphaned girls, where he was employed for over 30 years. The musical training at the Ospedale was such that Vespers and Mass became a focal point of Venetian culture and regularly attracted local nobility and foreign dignitaries. While his primary responsibility at the Ospedale was the provision of instrumental music like the L’Estro Armonico ("Harmonic Inspiration") of 1711, during periods when the position of choirmaster was vacant he was frequently called upon to provide music for Mass and Vespers and it is most likely that this was the genesis of the of the Magnificat from 1715.

Vivaldi’s Magnificat exists in four distinct versions and its wide circulation throughout Europe suggests that it was Vivaldi’s best-known sacred composition during his lifetime. He returned to the Magnificat in the late 1720s, making relatively small changes possibly for the patronal feast of the Venetian convent of San Lorenzo. More extensive revisions were made for a performance in 1739, again for the Ospedale, with Vivaldi providing alternate settings for some movements. Our performance will be based on the original 1715 version, but will include one of the 1739 additions, the alto setting of Sicut locutus est.

And my spirit hath rejoiced:
in God my Saviour.
Because He regarded the lowliness of His handmaiden:
for behold from henceforth all generations
shall call me blessed.
Because He that is mighty hath done great things to me:
and holy is His name.
Track Name: Et misericordia
Et misericordia eius a progenie in progenies:
timentibus eum.
Track Name: Fecit potentiam/Deposuit
Fecit potentiam in brachio suo:
dispersit superbos
mente cordis sui.
Deposuit potentes de sede:
et exaltavit humiles.

He hath shown might in His arm:
He hath scattered the proud
in the conceit of their heart.
He hath put down the mighty from their seat:
and hath exalted the humble.
Track Name: Esurientes
Esurientes implevit bonis:
et divites dimisit inanes.

As He spoke to our fathers:
to Abraham and to his seed for ever.
Track Name: Gloria/Sicut erat
Gloria Patri et Filio:
et Spiritui Sancto.
Sicut erat in principio et nunc et semper:
et in sæcula sæculorum. Amen.

Glory be to the Father and to the Son:
and to the Holy Spirit.
As it was in the beginning, now, and forever:
world without end. Amen.