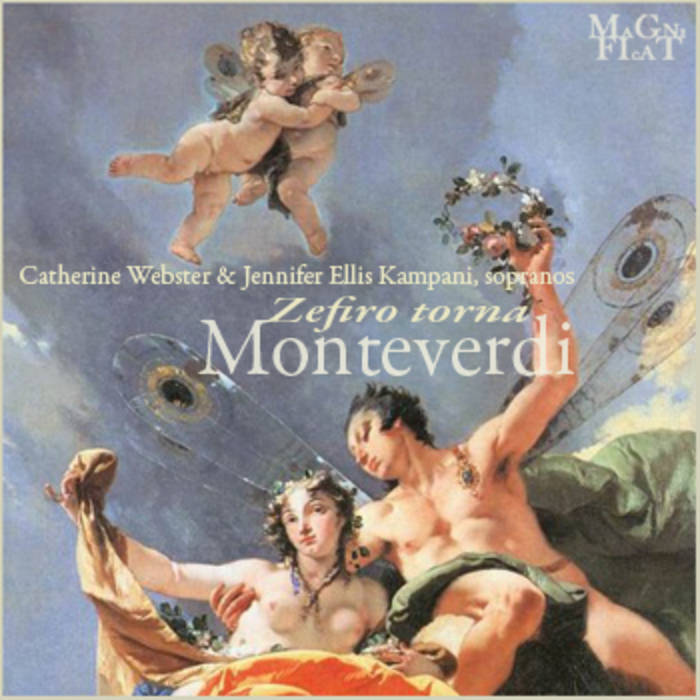 KH Hardy Monteverdi is an under-appreciated genius, whom I first came to know through Il Ritorno d'Ulisse in Patria, then through his motets and then madrigals. This is a lovely rendition of one of his most exquisite madrigals.

Sopranos Catherine Webster & Jennifer Ellis Kampani are featured in this live and unedited performance of Claudio Monteverdi's madrigal Zefiro torna. Published in the collection Scherzi Musicali, and in the composer's Ninth Book of Madrigals (1632), most of the piece is in the form of a ciaccona or passacaglia, which uses a constantly recurring bass line.

The madrigal sets a sonnet by Ottavio Rinuccini, the poet who authored the librettos for the first two surviving operas, Peri's La Dafne and Euridice, as well as Monteverdi's lost opera, Arianna. The text concerns the west wind Zephyr that brings Spring and its attendant opportunities for romance, or at least dalliance. Here, as in many of his madrigals, Monteverdi's exceptionally fluid text-setting skillfully subverts the structure of the sonnet so that its poetic effusions seem spontaneously improvised rather than constructed according to strict formal standards. The catchy repeated figure of the ciaccona, the springy rhythms, and the graceful but florid vocal lines give the work an infectious exuberance.

The composer's playful tweaking of the seconda prattica is evident throughout in his exaggeratedly obvious text painting. "Mormorando," (murmuring), for instance, is set to a wavery, murmuring figure that runs on for a little longer than is strictly necessary. Later, the first voice sings "e da monti" to a line that leaps upward to the extremes of the singer's range, while the second voice's "e da valli" precipitously tumbles down in the opposite direction. In the final tercet of the sonnet, the mood changes and the author gives in to despair because he has not found his beloved. The ciaccona figure halts, and these lines are set as a slow quasi-recitative. In the final line, "piango" (weep), is given a balefully pathetic treatment with a harmonic progression that droops almost irretrievably below the home key, before recovering on the final word, "canto" (sing), which brings a return of the ciaccona figure and the original mood of joy and optimism. These and many other examples give performers the opportunity to showcase the music's humor, making Zefiro torna one of the composer's most popular and frequently performed madrigals. (Adapted from All Music Guide)

Zephyr returns, and with sweet accents
enchants the air and frees the waves' feet,
and murmuring among the green leaves,
makes the flowers dance to his sweet sound.
With garlanded hair, Phyllis and Cloris sing
love-songs, dear and joyful to them,
and through the mountains and valleys,
high and low, the echoing caves redouble their music.
Dawn rises beautifully in the sky, and the sun
pours down the brightest gold, embellishing
the sky-blue mantle of Thetis with the purest silver.
Alone I wander through a lonely and deserted wood,
the ardor of two lovely eyes, and my torment,
as my fortune demands, now weep, now sing.